Harambee Dialogues. “African Renaissance: fact or fiction?” on the occasion of GMA2022

“I dream of a courageous, forward-looking and progressive African leadership that will erase the artificial boundaries of the colonisers that have caused so much suffering for the people of the continent,” these were the words spoken by George Johannes – Ambassador of the Republic of South Africa to the Holy See – during the event “African Renaissance: fact or fiction?” that took place at the Pontifical University of the Holy Cross in Rome on Wednesday 25 May 2022. The meeting was organised by Harambee Africa International on the occasion of World Africa Day, which commemorates the anniversary of the founding of the Organisation of African Unity in 1963, later called the African Union in 2002.
With its vast natural resources and the world’s youngest population, Africa is increasingly the focus of international attention. Despite being the Continent of the Future, however, serious contradictions remain alongside an indisputable ‘renaissance’. The aim of the meeting was to try to understand what this African renaissance consists of today and where it is leading. 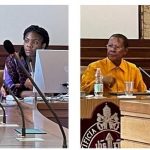 Building a better country
“Today’s theme is relevant to Africa today, which is struggling with some challenges that are new and some that are not,” Ambassador Johannes said. He went on to elaborate on the topic of leadership, specifying that “when we look at the history of the continent, we must remember the great leaders of the past who have left their mark”. He continued: “future generations of leaders must continue to build on the legacy of those who came before them and help shape those who will come after them. This will build a better country’. He concluded his speech by sharing a message of hope: “I believe that the African renaissance may not remain just a dream, but be achieved.

Bringing change through fashion
Next, Maryann Iloha, Bachelor (BNSc) at the University of Nigeria, asserted that “African renaissance is a reality that is happening”, and elaborated on this by focusing on her home country, Nigeria, through the aspect of fashion. She shared her personal experience of “a kind of revolution, a redefinition of what we call African beauty” that has taken place in her country: if until a few decades earlier it was normal to be influenced by European culture by straightening one’s hair or buying clothes in second-hand shops to look as much like Western standards as possible, from her university years onwards she realised that this was no longer the case. She went on to explain that designers such as Folake Folarin-Coker, Deola Sagoe and Duro Olowusi have helped develop a new African style that is spreading across the world and said: ‘I consider this a kind of renaissance because it is a gradual change that embraces a voice and a culture. 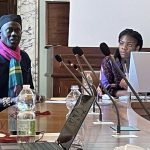 Breaking paradigms
If Maryann Iloha highlighted the possibility of fashion to bring change, journalist and author Filomeno Lopes delved into the issue of breaking paradigms in a country. “We are still the only continent that thinks what it does not live and lives what it does not think. (…) If you constantly think what you do not live and live what you do not think, you are forced to eat what you do not produce and produce what you do not consume. Africa has been in this position for centuries and this is the challenge of the renaissance’. Lopes continued his speech by mentioning the painful issue of leadership, evoked earlier by Ambassador George Johannes: ‘Today we have so many chiefs but no leaders, because there is no life project for those people. That project is done elsewhere, and in fact there is no thinking that is ours’. On the subject of the renaissance, he said, “it is more a theme of the future than a problem of the past and is to be celebrated as an occasion to remember that we still have a long way to go”.

DR Congo. In the tormented South-Kivu the integration of the most vulnerable is a contribution to peace.

As of today, anyone wishing to donate can contribute, together with Harambee, to ensuring...

Our warmest wishes for the New Year!

Dear friends, this year that is drawing to a close has been particularly intense,...