Home > News > Rep. Dem. Del Congo. Thanks to the Harambee Project, the Children of Yangala Now Have a Future of Hope

The intervention in support of the Cacles Association, linked to the Diocese of Luiza, in the area of Yangala (DR Congo), mainly characterised by large rivers and far from the city, has been completed. In this particularly depressed area, there is the Kuiza Kuajima school, the only reference centre for the children of the surrounding villages.

Most of the children are orphans, victims of the clashes provoked by the Kamuena Nsapu militias that took place between 2016 and 2019 in which more than 430 young people died in the area; on that occasion, the militias looted the parishes and destroyed the school and all the school equipment.

“The school was rebuilt according to criteria of stability and sustainability. The foundations are made of stone and concrete. The concrete walls, which support the laminated roof, are solidly built to withstand wind and weather,” says Don Marcel MUNONO KABEMBA, project leader.
“Classes started in September, and the enthusiasm was such that students and teachers wanted to use the facility right away, even though it was not yet finished“. 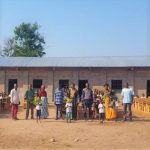 There are 300 children attending regularly “The population collaborated with great enthusiasm, having realised that the school was for a BIGGER GOOD for their children, and so they got involved in transporting water, sand and, in general, materials. Many also contributed to the workers’ meals…. You could say that this is really the village school“.

Moreover, “Thanks to the renovation, Kuiza Kuajima has become a centre of attraction, a reference and an object of admiration and photography by the sons and daughters of Yangala and travellers passing through Yangala“.

In certain parts of Africa, education, for multiple reasons, is still a right denied to children, compromising their opportunity to build a future.
57 million children in developing countries are still excluded from it; of these, more than half live in sub-Saharan Africa (Source: UN). It is a huge challenge, but one that can be overcome. And as of today, 300 children a year in Yangala will certainly have a better future ahead of them.

The intervention in support of the Cacles Association, linked to the Diocese of Luiza,...

On its 20th anniversary, Harambee launches a symposium on experimental designs to tackle the...

Last Saturday, 25 June, the first edition of the ‘Fashion Market’ organised by the...